HSLDA is an organization that as a young fundamentalist homeschooler, I once admired. I bought Micheal Farris' lines about defending freedom, and fighting for homeschooling rights. Now, Micheal Farris and HSLDA sicken me. When I see his smug, smiling face, I see the face of evil.

That sound a bit harsh, doesn't it? Well, let me review why I feel this way about him. There's been many recent revelations about him and his organization lately,  including the facts about how they once called a man who forced his children to live in cages "a hero", and how they want to dismantle all legal protections for children, all while campaigning for "parent's rights".

Recently, it also came to light how cult leader Bill Gothard, who is facing some extreme allegations of sexual abuse and sexual harassment of his staff, was Micheal Farris' mentor.

If you thought it couldn't get any worse, there's been new information coming to light about how not only have there been reports of sexual assault and harassment coming out of Patrick Henry College, the college Farris founded, but that staff tried to intimidate victims into silence, but questioned their accounts, and even out rightly blamed them for what was done to them.

Here's more from a report from the magazine New Republic, titled "Sexual Assault at God's Harvard":

Here's what one student had to say:


“Basically, my issue was swept under the rug, and the assaulter received little else but a reprimand,” says a young woman who attended Patrick Henry between 2004 and 2008. The student fell asleep at an off-campus party where there had been drinking and was awoken by a male PHC student assaulting her. She says she reported the incident to Patrick Henry. “The administration encouraged me to not go to the police and said that, because alcohol was involved and I was violating the rules there, they hinted that I could be expelled if I brought light to the incident,” the student says. “The focus was the alcohol. I drank. I sinned. I deserved to be assaulted in the middle of the night.”


One student, after it came to light that she had been cutting herself because of trauma from a sexual assault that had happened before she arrived at PHC was essentially forced out of the college by Sandra Corbitt, Dean of Student Life:

Another student, who asked to remain anonymous, says she was raped the summer before her freshman year. When she arrived at PHC in the fall of 2007, she was deeply depressed and cutting herself. She was summoned to Corbitt’s office. “I remember her smiling a lot in a forced, insincere way while she was telling me that ‘someone’ had relayed to her my ‘issues,’ and the ‘administration was concerned about my ability to successfully complete the semester,’ ” she wrote in an e-mail.

The dean insisted that she take a psychological evaluation, then called her back to the Office of Student Life, got her parents on speakerphone, and made her tell them about the assault. When she choked up, the student says, Corbitt cut in to finish the job. Then the dean informed her parents that she was unfit for PHC and needed to be retrieved immediately. Her father flew out the following day and whisked her away, says the student.

When confronted about this via Facebook by Ryan Stollar, founder of Homeschoolers Anonymous and his supporters (myself included) on Facebook post he wrote that was a thinly veiled reference to the sexual abuse allegations coming to light about his mentor, Bill Gothard, he deleted the post from his public Facebook page rather than face the criticism, and he has apparently blocked me from his public page in retaliation. (I no longer find it on Facebook search, but I can find his personal page).

When confronted about it again (as well as his censorship of all criticism), on a seperate post, here is what he finally had to say in response: 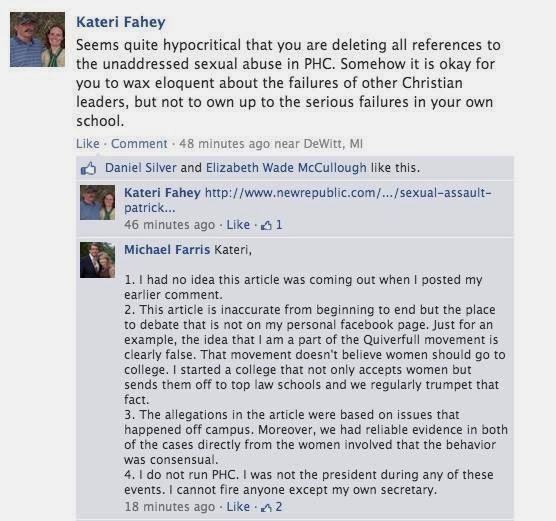 "Moreover, we had reliable evidence in both of the cases directly from the women involved that the behavior was consensual".


That was in reference to the two cases mentioned in the article that directly involved PHC and the perpetrator was a student. Why did he feel it was adequate for PHC to make this determination, instead of local law enforcement/prosecutors?

This line from his statement, I especially find ludicrous, and a sign that he actually knows that the allegations were true (let me explain in a moment):


"I do not run PHC, I was not the president during any of these events. I cannot fire anyone except for my own secretary"

This was not only a reference to PHC's problems in general, but about calls from supporters of Homeschoolers Anonymous that he fire Sandra Corbitt, Dean of Student Life. He claims that he has no authority over PHC (other than his personal secretary, of course), even though it was the college he founded. By the way, look who is listed as PHC's chancellor on their own website: 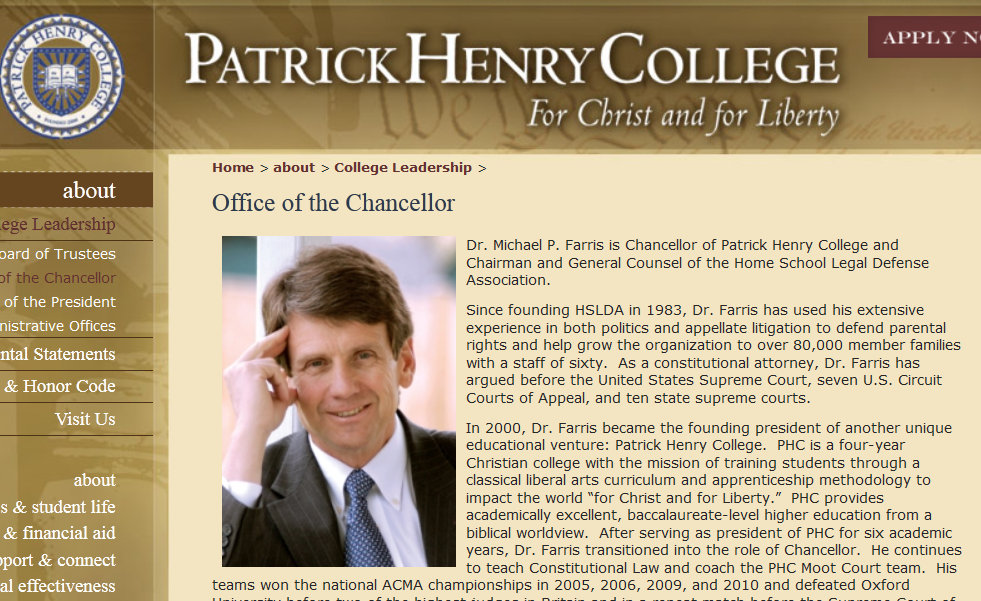 The website not only lists him as their chancellor and founding president, but also mentions that he still teaches Constitutional Law there and coaches their debate team. Mr. Farris, if you're going to claim that you have very little connections to the college, don't make it so bloody obvious on the college's website that this isn't the truth. The double talk is rather laughable.

The reason why I said that his pathetic attempt to distance himself from PHC is further proof that the allegations are true is that as a lawyer, and someone who has been in the public eye for 30 + years, he knows all about public image.

The fact that he is trying to distance himself from PHC shows that he knows, (or at the very least suspects), that the allegations are in fact, the truth, and that if more information and proof were to come out about PHC's practices, then he has already tried to establish himself on the record his claims that he doesn't have much to do with the college anymore, and he can try to wash his hands of the whole affair.

He wants plausible denial, he wants to act like this caught him unaware.

Sorry, Mr. Farris, it's doesn't work that way, PHC was your baby, your pride and joy from day one, your mission in life, and we all know it......
Posted by Sheldon Cooper at 11:17 AM